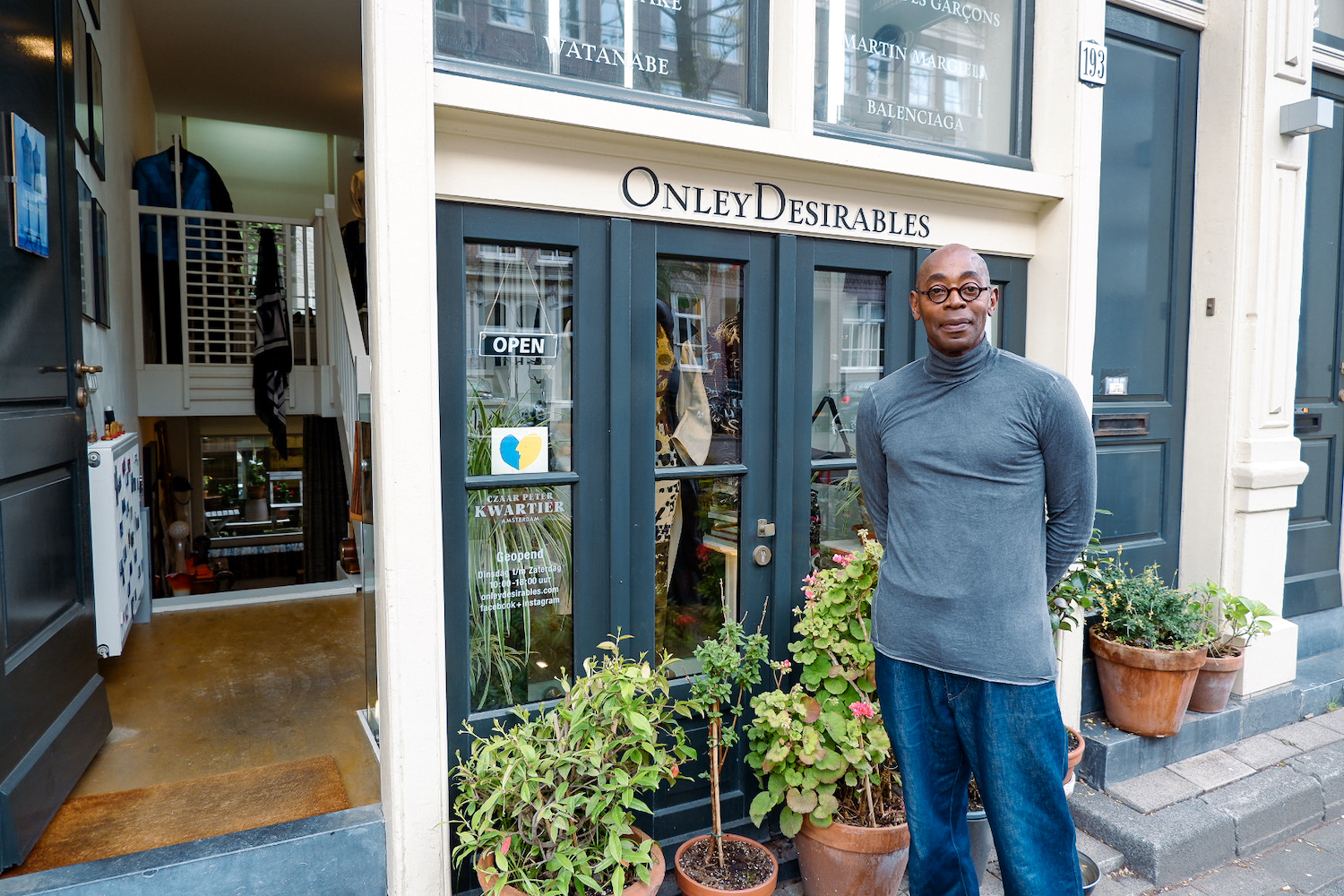 His selection of clothing has been carefully curated. It’s only high end, luxury brands that line his racks and many are recognizable without checking the tags; the gothic glam of Rick Owens, the breathable and scrunchy fabrics of Issey Miyake, or the bright prints of Moschino. And if you, like me, miss large American-style changing rooms, Gerard has you covered. His entire downstairs is a private changing room. “Once,” he tells me, “I had a woman stay from 12:15 to 20:30, and usually the shop closes at six!”

I can understand the appeal. I stay an hour after our interview trying on clothes that Gerard has hand picked for me. “This blazer was from Jean Paul Gaultier’s collection in 1994. It’s a classic!” “If you like that top, try this dress!” He closes the curtain of the changing floor and as I try on one item, he has three more waiting. For a mother of two, who rarely has time for herself, the one on one attention is hard to resist. It helps, too, that he has a good eye for style.

The Change you need in your wardrobe

Gerard has been working in fashion for over 30 years. First, as a visual coordinator for windows at stores in Los Angeles, then running his own fashion line and custom cushion line in San Francisco, and eventually working in retail here in Amsterdam before starting his own retail store. I sat down with Gerard to learn more about his take on the fashion world and why second-hand shopping can be just the change you need in your wardrobe.

You were born and raised in the US. What brought you to Amsterdam?

GO: UN Amour. It was a long distance relationship for 15 years. I was coming back and forth to San Francisco and then finally in 2005, I said to myself, “I love it so much here. Why don’t I just move?” So I moved here.

In San Francisco, I designed pillows. It was small, intimate and in the meantime I was coming back and forth here, not sure where I would fit in workwise.

GO: I’ve always tinkered with second-hand designer stores because it’s fun; it’s serious but you don’t take it seriously. The audience that comes in has the taste. Some of them have the money, some of them don’t. It’s casual. You come in. If you see something you like, you buy it. If you don’t, you don’t.

What makes it special

So many people have told me they love your store. What makes it so special, in your opinion?

GO: I’m old fashioned. I love charm. Nine streets twenty years ago was charming. Now I never go there. It’s predictable. It’s the same concept. You go into one store and it’s like going into any other store. It’s a “Pop Up” feeling. I don’t expect to come in and see someone doodling on their phone. Instead I need that interaction. I need that hands on. That’s what I try to offer here. You come in, you don’t have to buy anything. Sometimes people come in to chat. Some people just need that interaction with others. I need that, too. I look forward to seeing people here every day. Often, it’s the same people.

How do you describe the style of the store?

GO: Eclectic, Intimate, Chic, Unique. It’s what I always enjoy when I go into stores. There’s this one store in San Francisco, Cris (Consignment) on Broadway (has now moved to Polk street) and she was my model for my store. It’s been there for 25 to 30 years. It was such a personal touch. She always had unique items. Always a find in there. She could always have a little chit chat. I think that is what I try to make, that homey feeling.

Why should people shop second-hand?

GO: When you are shopping second-hand and vintage, you’re going outside the realm of what’s fashionable, which is only this moment. As I speak, a new look has already hit the runway. The ripped jeans have already gone out for the slim fit or whatever else. It’s not just “Oh, Kim Kardashian had that on page 20. I want to replicate the look.” Why would you? You’re not Kim Kardashian. There’s so much between who you are and what she’s all about. Then play with that middle portion. You have so many options.

It’s about creating your own look

GO: When you shop second-hand, you are removing yourself from that mode of fashion − the “all about the now look” and you give yourself a free interpretation of what you enjoy with your own combination and your own look. That’s what vintage gives you. More freedom to inject your own style: a jean from now and a top from this era and then a jacket from the 80s. With second hand shopping, you are constantly creating your own look.

Where do you get your clothes?

GO: All over the place. When I first started I bought everything in Italy, Japan, US. Back then, I wanted to establish a look, a feel, an image for the store. Later, I would want people to bring in their own clothes and unique items, that can fit into what I have. Now, I would say 75% is from people who have too many clothes or are tired of their outfits. I have a friend who lives in Japan and he is responsible for my Miyakis, Yamamatos and my Commes de Garçons. I have a friend who lives in California and he is my eyes and ears for whatever may be floating around. He sees and sends me photos and he says “What do you think?” I buy them, set them aside and maybe once or twice a year he will send them to me.

When I lived in California, there were numerous shops that I loved to go to, also second-hand and markets and I could score big time on really unique pieces. Now, he’s my eyes there. For the rest, if I’m on vacation and see something then I’ll get it and that way it keeps the collection fresh.

How do you come up with the models that you put on Instagram?

GO: That’s my personal interpretation. There’s no rule in fashion to begin with (that I’ve ever followed, anyway). For me, that gives me carte blanche to play with everything. It’s how you feel. I do a lot of photos on Instagram and Facebook. I’ll add a coat or take away a scarf. I’m always playing with it and rotating things. Sometimes people will come by and say, “I passed by your window on Tuesday and I saw a dress. Do you still have it? Because I came back on Wednesday, and I saw it was gone!” No, it’s still there. Haha!

To watch Gerard dress a mannequin, check out our Instagram page @modepilot. You can learn more about Onley Desirables-Clothing with a Past! by visiting the store in Amsterdam at Czaar Peterstraat 193 or by visiting the Instagram page at @onleydesirables. Another good Second hand shop in the Netherlands >>>
Share
Facebook
Twitter
Pinterest
WhatsApp
Previous articleSocken für den Sommer − So trägt man sie | MODEPILOT.de
Next articleGreenwashing in Modeindustrie | MODEPILOT.de